Most of of the practicing and aspiring DJs must have noticed that Canaro-Maida's superb (and much overplayed) 1935 "Poema" doesn't quite fit seamlessly into tandas. "Poema" is quite singular in its gently melancholic, softly nostalgic flow, while other Canaro's hits of the period tend to be more insistent and dramatic in quality, energetically driving rather than softly soothing.


One can't help noticing a few more peculiarities about this hit. Its popularity peaks overseas, especially in Europe, and reaches the low point in Buenos Aires. And no other orchestras in Argentine recorded the piece.

Thanks to German Nemoljakin's constant flow of stories from tango's past, I got an intriguing glimpse of Poema's special history, and couldn't resist digging deeper into it. To sum it up:

The beautiful "Poema" isn't quite an Argentine tango, it is as much a European tango, composed by the expat musicians who were singularly successful in transplanting tango to the musical scene of Paris.
Furthermore, Poema's lack of acceptance in Buenos Aires wasn't helped by the dark political undertones of its story, and the fact that its lyrics are a thinly veiled confession of a banished murderer. 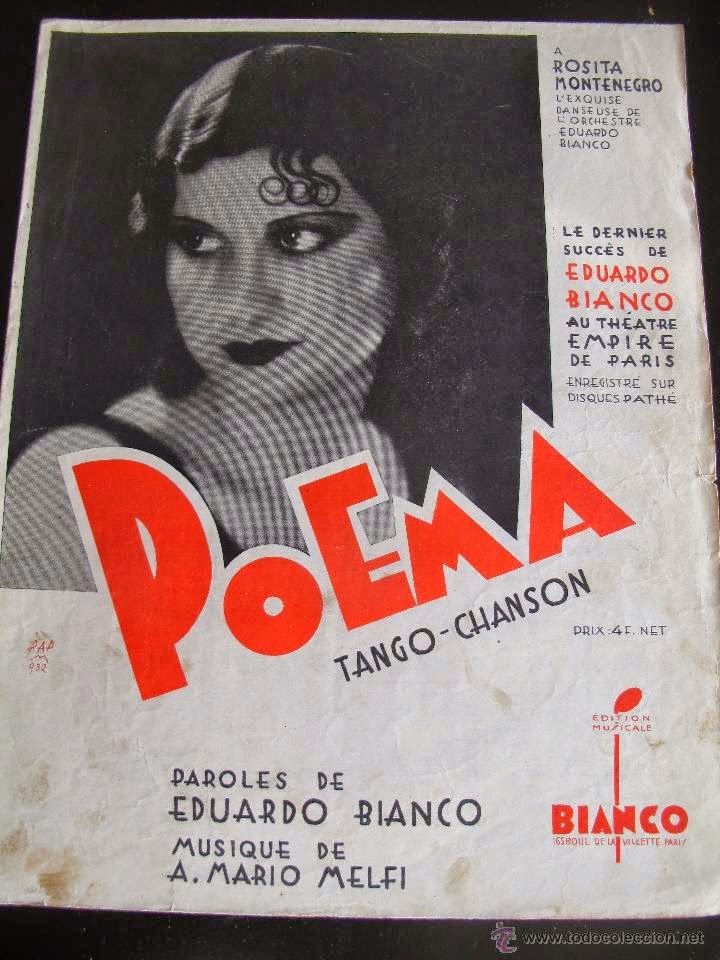 "Poema" is undoubtedly the best composition of Eduardo Bianco, an Argentine who lived in Europe for nearly 20 years, and who mastered the art of making the tango of Argentina sound the Parisian way. The oft-retold story says that Bianco and Mario Melfi, aided by others in their band, composed it on a train during a 1932 tour of Germany. What is rarely mentioned is that Bianco's lyrics tell his personal, and thoroughly suppressed, story from his final year in Buenos Aires. In 1924, Eduardo Bianco played the first violin in the orchestra of the famous Teatro Apolo at Avenida Corrientes. Bianco learned that his wife cheated on him with the pianist of the orchestra, and shot his rival to death in a fit of jealousy. As translated into English by Alberto Paz, Bianco's stanzas tell us how a dream of sweet love ended up awakening the heart's monsters, the chimeras which can never be fully grasped; the words "intenso mal" which Alberto Paz translated as "intense misfortune" may be better interpreted as "overpowering evil":


...You'll remember my love,
and you will come to know
all my intense misfortune.

Of that one intoxicating poem,
nothing is left between us,
I say my sad goodbye,
you'll feel the emotion
of my pain…

Eduardo Bianco was jailed and tried for murder, and acquitted - according to Jose Maria Otero, owing to political connections of Bianco's influential rich friend, Martin "Macoco" Álzaga Unzué, a race driver, bon vivant, and night club owner whose circle included top entertainers, aristocrats, and mobsters. But the acquitted violinist had to leave Argentina. Soon, he sailed for France.

In Paris, Bianco with the bandoneonist Juan Bautista Deambroggio "Bachicha" assembled Orquesta Tipica Bianco-Bachicha, which started to play in the downstairs cabaret of the famed Argentine-themed Montmartre boîte, "El Garron", and toured Europe, the Americas, and Middle East. He continued cultivating relationships with the rich and powerful, even dedicating his tango compositions to kings and queens, and (twice) to Benito Mussolini, and boasting of praise from Stalin and Hitler. It was the 1926 "Plegaria", dedicated to Spanish king Alfonso XIII, "symbol of Spanish democracy" (who fled after the electoral victory of the Republicans, and supported Franco with the outbreak of Spanish Civil War) , which brought Bianco most infamy.

The most detailed account of Bianco's European years has been provided in Enrique Cadícamo's 1975 "La Historia Del Tango En Paris" (and summarized in a recent El Litoral article). Cadícamo, who toured Europe with Gardel, advised his tango friends to avoid discussing politics with Eduardo Bianco because Bianco supposedly informed for Gestapo (the French police detained and investigated him in 1937, but released him). Bianco associated himself with Eduardo Labougle Carranza, Argentine ambassador in the Third Reich Berlin and an avowed antisemite. They supposedly convinced Goebbels that tango should take place of the "racially tainted" Jazz music, and were invited to perform in Berlin's "La scala".  Then, at an Argentine asado reception at the Embassy, Bianco's orchestra got to entertain Hitler himself (even with a bandoneon player personally grilling meats for him), and the fuhrer asked for an encore performance of "Plegaria" ("Prayer" in Spanish). The sentimental monster must have enjoyed the play between the solemn sound of the piece and the frivolous, erotic perception of the word "tango", because soon, he found a horrible use for Bianco's score. In a short time, "Plegaria" would be dubbed "Tango of Death", as the Auschwitz prisoner band was ordered to play it when the camp prisoners were led to the gas chambers. The horror of "Tango of Death" has been immortalized in the verses of Paul Celan, a Jewish Romanian death camp survivor; but Celan had to strike any reference to "tango" when he translated his poem from Romanian to German, because "tango" still sounded disrespectfully racy in German. So "Plegaria" turned into "Todesfuge", "The Death Fugue"!

(A personal side note here ... this is how I got to understand another allusion in Psoy Korolenko's "Ilimsky Ostrog", an amalgamation of quotes and allusions of three centuries of Russian and foreign classic poetry, folk song, pop and rock, where peeling off the layers of meaning never ends ... "Meine Todesfuge" is heard near 4:55 in this concert record)

The WWII broke out, and Ambassador Labougle returned to Argentina to champion the cause of South American neutrality in the war, the cause which must have been largely anti-American and anti-Brazilian, rather than pro-Axis, in Argentina, since it traditionally allied itself with Great Britain, its main export market, and, after the Great Depression-era unfair trade treaties went into effect, also Argentina's main supplier of manufactured goods. The United States, in the meantime, practiced the ideology of continental domination, the Manifest Destiny, and armed Argentina's regional arch-rival, Brazil. Although truth be said, Argentine leaders sought to emulate many aspects of the Axis, from nationalist fervor to regional expansion plans (Argentina even covertly installed a friendly, pro-fascist government in Bolivia in a 1943 coup). But time was running out for the open sympathizers of the Reich, and in January 1944, Argentina had to break relations with Nazi Germany (although it didn't declare war until a year later). In the meantime, Bianco played across occupied Europe for the Nazi troops, and on the Third Reich radio stations. As it's become clear that Argentina will sever relations with the Reich soon, he left on a Spanish visa from King Alfonso's times, and faced a lengthy investigation by the British intelligence services - Bianco himself wrote that he was only cleared owing to his investigator's appreciation of the music of tango. He finally returned to Buenos Aires in 1943, at the peak of Tango's Golden age, amid insane richness of tango orchestras. Bianco tried hard but has never succeeded in competing against the local talent; his remained a purely export version of Argentine tango.

Before we return to 1935, and to Canaro, let me mention that "Poema" has been recorded by one more Parisian band, the Orquesta Tipica Auguste-Jean Pesenti du Coliseum de Paris (A.-J. Pesenti was a bandoneonist from Colombia known to us largely owing to the Japanese collectors; in fact pre-WWII tango dancers and listeners in Japan played French tango records of Bianco, Bachicha, Pizzarro, and others, and generally believed that tango was a genre of French music)

Canaro, of course, also famously chose Paris to be his base after 1925 (embarking on tours to New York, Berlin, Hamburg, and Madrid, and to a family roots discovery trip to Italy, from France). Sometimes people say that Canaro stayed abroad for a whole decade, and supposedly didn't make a comeback to Buenos Aires until 1935! Technically, it's very untrue, and yet in terms of Francisco Canaro's legacy and influence, it may be true that the decade between 1925 and 1934 was the low-key part of his tango carrier. He tried diversifying into other genres - rancheras, maxixe, foxtrot, jazz, and even recorded such Americana pieces as "Red Red Robin" as "Francisco Canaro Jazz Band". He toured the provincial towns, played a lot for the radio stations, launched a series of comedy musicals, and appeared in a movie with Gardel, all to regain his fame and to secure the grand dance halls of BsAs for himself again. Perhaps it was the chilling effect of the Great Depression on the porteno party scene. Or Canaro's affiliation with the recording company Nacional Odeon, which pitted him against the more prominent RCA Victor. Or it could have been the continuing echo from yet another fatal gunshot story which may have played a role in Canaro's departure to Paris in the first place. 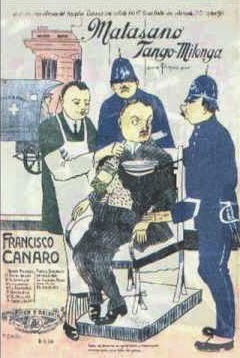 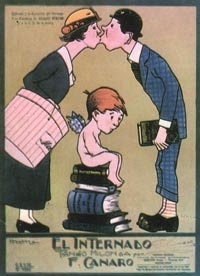 This is a story which began almost exactly 100 years ago, in September 1914. Francisco Canaro's lucky break into the ranks of most-listened-to tango orchestras was catalyzed by his invitation to highlight Primero Baile del Internado, the First Ball of Medical Interns, which marked the end of the spring break in the School of Medicine. The interns of Buenos Aires found their inspiration in Paris, in traditional medical students Bal de L’Internat held at Bullier Hall. To this rancorous celebration at the famous Palais de Glace, Canaro premiered a tango titled Matasano, "The Slayer of the Healthy" (as the medical students were humorously called), dedicated to Hospital Durand in Caballito neighborhood. The following year, Canaro premiered tango "El Internado", "The Intern", at the Intern's Ball. 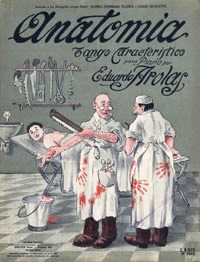 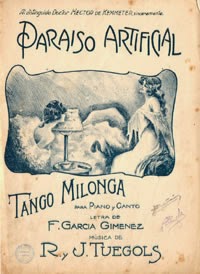 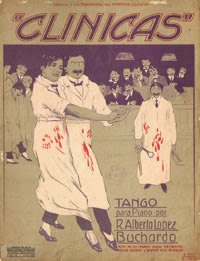 muñeca" (dedicated to outstanding surgeons' hands), "La inyección" and "El microbio" (continued with tangos about specific pathogens, "El dengue" and "Ae. Aegypti"), even "Paraiso Artificial" ("Artificial Paradise",  a tango cancion about morphine). The tango which premiered in 1924 was titled "El once: el divertismento" - "The 11th: let's have fun". 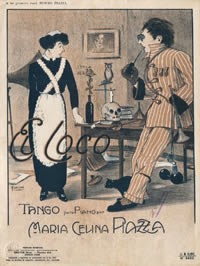 But soon after the 1924 celebration, the medical students took part in a prank gone horribly wrong, and an intern Ernesto O’Farrel was shot and killed by an administrator at Hospital Piñero, triggering a physician strike at all municipal hospitals. The Baile del Internado was never held again. And Canaro's memoirs mourn the things tango lost after 1924...

Yet Canaro's tango also gained from being exposed to the music of the European expats, and he kept returning to the scores from Paris, starting from a 1928 recording, with Charlo, of "Bandoneón arrabalero", a tango Canaro re-recorded several times. The 1925 score is signed by Juan Bautista Deambrogio Bachicha himself, although Enrique Cadícamo says in “La historia del tango en París” that it was Horacio Petorossi, a guitar player in Bianchi-Bachicha orchestra, who sold the score to Bachicha for a thousand franks. The 1935 recording of Bianco's Poema continued the trend of cross-fertilization of Parisian and BsAs tango music, but failed to impress the listeners in Argentina. Yet you can understand now how it struck a chord with the European tangueros of the generation of the Great Worldwide Tango Rebirth!
Posted by MOCKBA at 4:31 PM