The Big 5 Orchestras: a DJ Survey

A few months back I decided to apply statistical analysis to the perennial battle of opinions about "the most important tango orchestras", using data from Ron Weigel's survey of BsAs milonga scene, and from Tango Tecnia survey. After sifting through the forest of numbers, we ended up almost exactly where we started - knowing that D'Arienzo and Di Sarli are indeed the two top tango orchestras, but one can't tell with statistical confidence who deserves the 3rd, 4th, and 5th places. (We also discovered that a mixed tanda ranks near the top of milonga and vals charts, and that Canaro's is a top-ranking milonga orchestra).

In this post I add an additional data trove - DJ SuperSabino's 3 years' worth of interviews with 80 great tango DJ's. There is a lot more in these informal interviews than the dry numbers - there are DJs coming-of-age stories, statements of artistic position, attitudes towards dancers, organizers, other DJs, and insufferable music, professional secrets shared or hidden, even a question about groupies and sex which makes almost everyone blush.

But for the sake of statistical analysis, I'll concentrate on the numbers (and then add a few music discoveries from these interviews in the very end).

Among the SuperSabino's respondents, over 1/3rd were his compatriots, and most of the rest were elsewhere in Europe; even some Argentines were more like European expats, such as Felix Picherna. But when asked about the regional differences in tango music preferences, most were quick to point out that these "geographic" differences fade in comparison with differences between tango subcultures, and even with the waves of music fashions and evolutionary changes in the musical tastes of the tangueros over the years. Some even said that it is the cortinas which should reflect the national specifics, not the tandas!
The DJs were asked which 3 orchestras must always be played at the milongas. kind of gauging their perceptions of what is "proper". Of course Di Sarli and D'Arienzo stood out in a statistically significant fashion. And these two were the only orchestras about which the majority of the 80 DJs agreed. But Canaro and Troilo (each supported by 40% of the DJs) also lead the rest of pack in a statistically significant way. So one may say that there were "Big 4" orchestras perceived to be indispensable - D'Arienzo, Di Sarli, Canaro, and Troilo. The 5th couldn't be defined though, as Pugliese, Biagi, and Fresedo were in statistical dead heat. And then the next question - what did the DJs actually like themselves - muddied the waters... 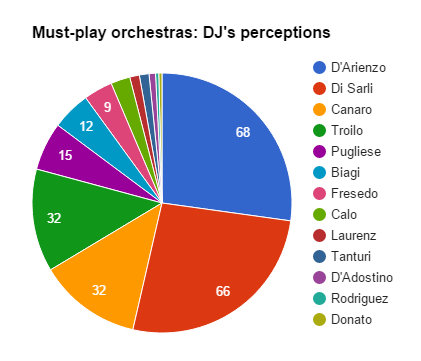 Di Sarli and D'Arienzo still lead the pack, but now with fewer than half of the DJ supporting them, and within the margin of error of Pugliese and Troilo. But while Pugliese definitely belonged to the top tier, Troilo wasn't significantly ahead of Canaro or Biagi. 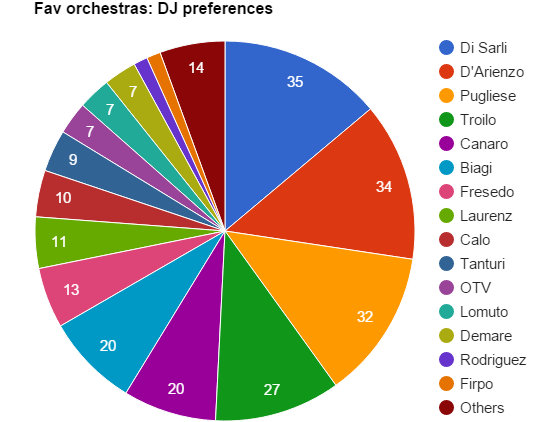 Lastly the DJs were asked to describe their "calling card" tandas, something which could distinguish themselves or give them some bragging rights. The lists were thick with hard-to-get and unusual records, but they also strongly represented the best, richest orchestras. D'Arienzo and Di Sarli led the choices of the instrumentals and were significantly ahead of the rest of the orchestras. 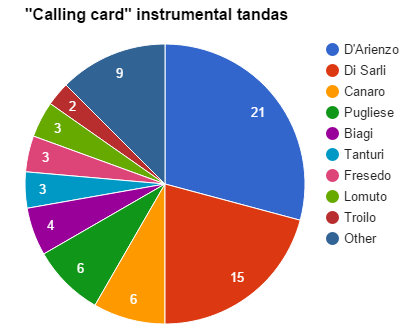 The "built-to-impress" vocal tandas were distributed much more evenly. D'Arienzo, Di Sarli, and Troilo were formally tied but not statistically significantly ahead of the next 8 runners-up, not even of Demare or Enrique Rodriguez. It looks like a good singer was a great factor for making the playing field even - those orchestra leaders must have known what they were doing when they were offering top peso to the vocalists!
The two oldest high-ranking instrumental-tanda orchestras which built their fame even before vocals started to rule tango-for-dancing - Canaro and Lomuto - virtually disappeared in the vocal-tanda chart (left with a tanda each), while Calo, Laurenz, and Rodriguez surged ahead.
Interestingly, 6 out of 9 vocal Troilos where with Fiorentino (vs. 2 Marino's); of 9 vocal D'Arienzos, 3 were with Echague and 3 with Maure; and 4 out of 7 Fresedos, with Roberto Ray. 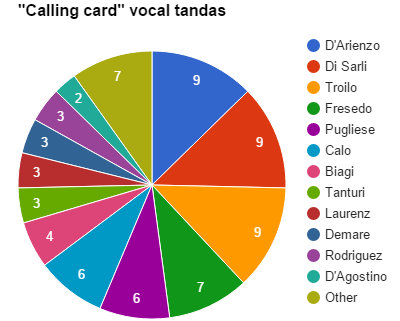 In a perfect parallel to the trends shown by Weigel's BsAs survey, the "showcase" vals and milonga tandas also tended to be mixed (21% of valses vs. 29% in Weigel's chart, and 31% of milongas vs. 22% in Weigel's chart), with Canaro ranking very strong in milongas, and D'Arenzo and Biagi, in valses. 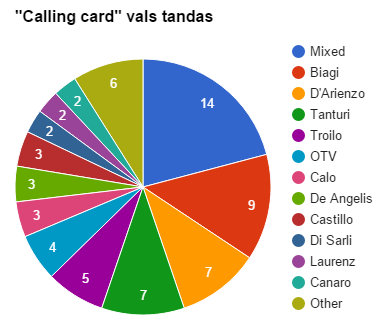 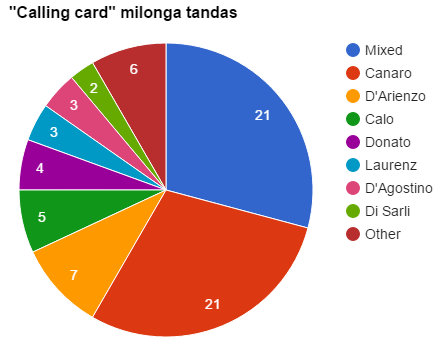 and finally, a few surprising unusuals from the DJ's responses.